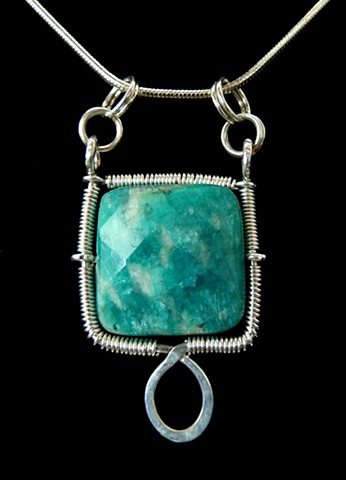 This square faceted, Amazonite gemstone, is framed by sterling silver 20 gauge sterling silver wire which has also been coiled with a finer 26 gauge fine silver wire. The center loop at the bottom has been hammered flat for an additional touch of craftsmanship.

This green and white Amazonite is really stunning on both sides. One side has a more striking white swirl through the center. This pendant makes a statement, while still being very wearable everyday with it's smaller size. This piece welcomes spring with it's vibrant saturated green color, trimmed in a clean, cool, silver wire.

Amazonite, also known as 'Amazone stone,' is a light, aqua-green stone with white mottled flecks. The name Amazonite, has been taken from the Amazon River, where formerly certain green stones were obtained. The origin of the stone in the U.S. is the New England States and Colorado. The composition is basically of potassium feldspar, and it is a green variety of microline.

Amazonite is a mineral that is cut and polished as a gemstone. The green color of the stone has been attributed to the presence of copper. It can also be due to some organic pigment, probably an organic salt of iron, as it is removed by heat from the source.

This semi-opaque stone, was used extensively by the Egyptians. It is called the stone of courage and is said to be named after the Amazon women warriors. Some archaeological evidence suggests that the Amazonians were a matriarchal society during the Bronze Age.